Replacing the associativity property of multiplication with a process

yields a richer notion of associativity. It also means that multiplying more things requires more care about how they are associated.

There are five ways to multiply 4 things, and they fit into a neat shape! This is known as K4, and it shows how the different ways of associating 4 things are related; there are two different ways around the pentagon! 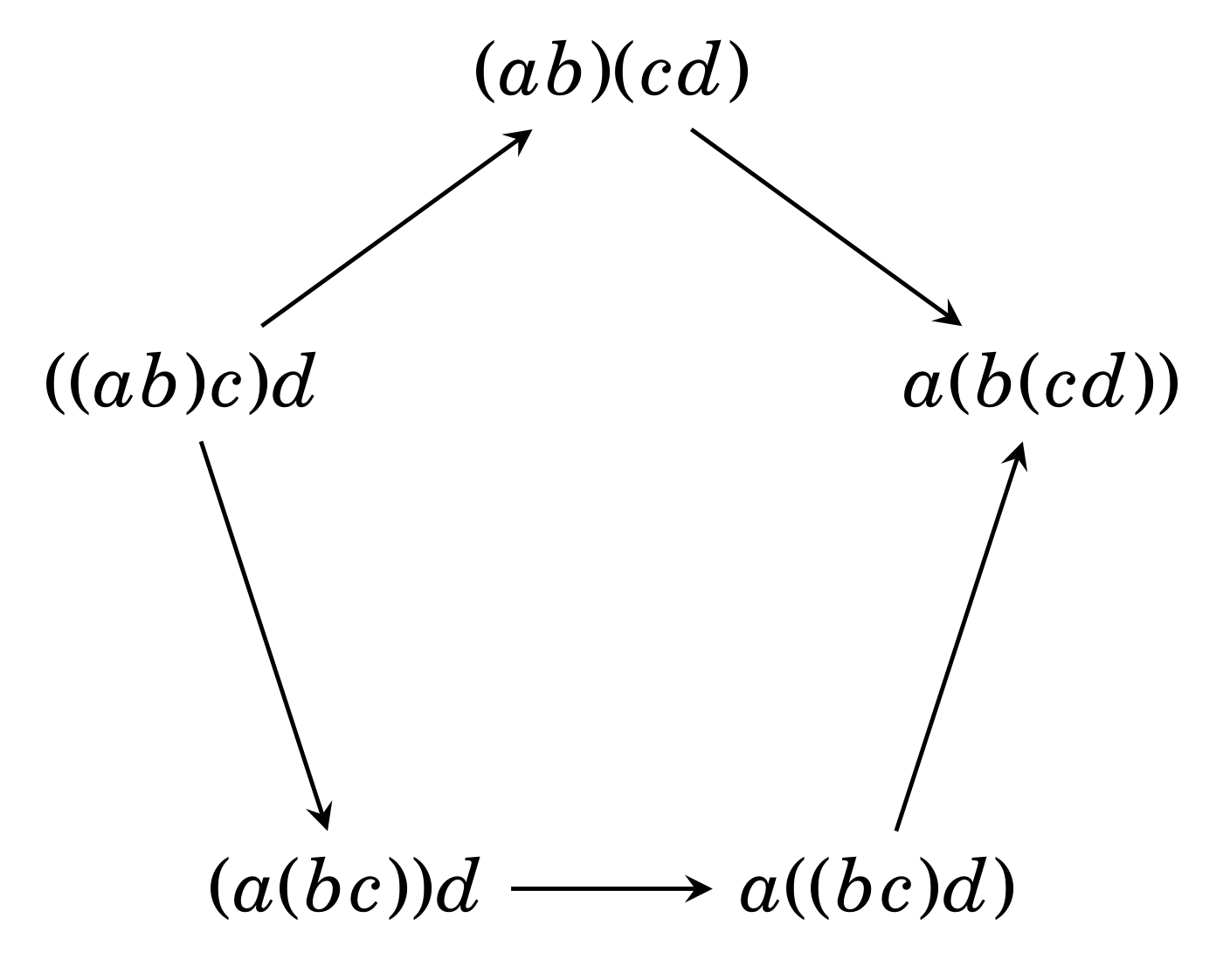 I call this the associagon, but most people call it a pentagon.

For associating 5 things, you need a more complicated shape known as the associahedron. It has six pentagonal faces, plus three quadrilateral faces. Wikipedia has more information about the associahedra. 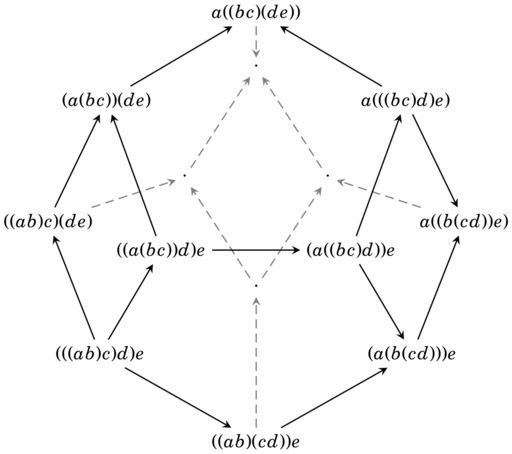 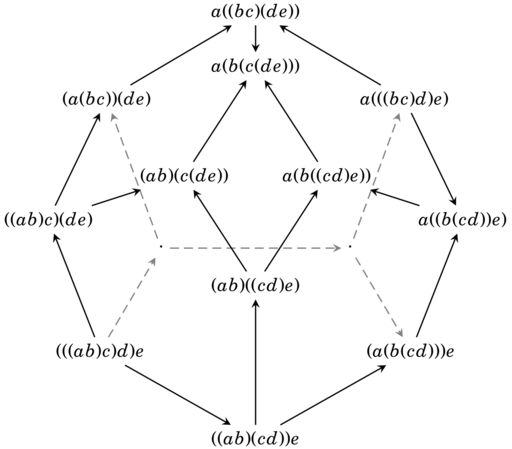 Here is a cut-and-fold net for the associahedron K5! It's based on an earlier version made by Cheng and Lauda, but with vertices labeled as in the diagrams above. Also it has tabs for easier assembly, and you can download the tikz source for it too!

This uses the tikz folding library, with some custom extensions to foldable Platonic and Archimedian solids by nvcleemp. Those additional solids were written in 2009, and added to tikz in 2012, but the instructions on the blog post were really useful when I wanted to figure out how to make my own!

If you make this carefully, you will note that this net actually doesn't quite fold into a polyhedron -- the faces aren't quite flat! There is a lot of interest in actual polyhedral constructions of this shape, and there are lots of different ways one can do it. Eventually I'd like to have some other cut-and-fold nets for those too. If you make one, let me know!

One thing I haven't seen anywhere (or at least, not anywhere that I can understand) is a model for K5 which has the vertices as in the diagram above (and in this net), but with actual polyhedral faces. If I knew coordinates for the positions of these vertices in space, I could find the angles between them and make an actual polyhedral version of the net above. If you know how to do this, please let me know!

I tried to do this homework exercise myself, using regular pentagons and computing the positions of the resulting vertices. But I discovered that the four vertices which would form a quadrilateral between four pentagons don't lie in a plane. This means that to solve the problem I would have to use a non-regular pentagon of just the right size... Maybe I'll try that later. 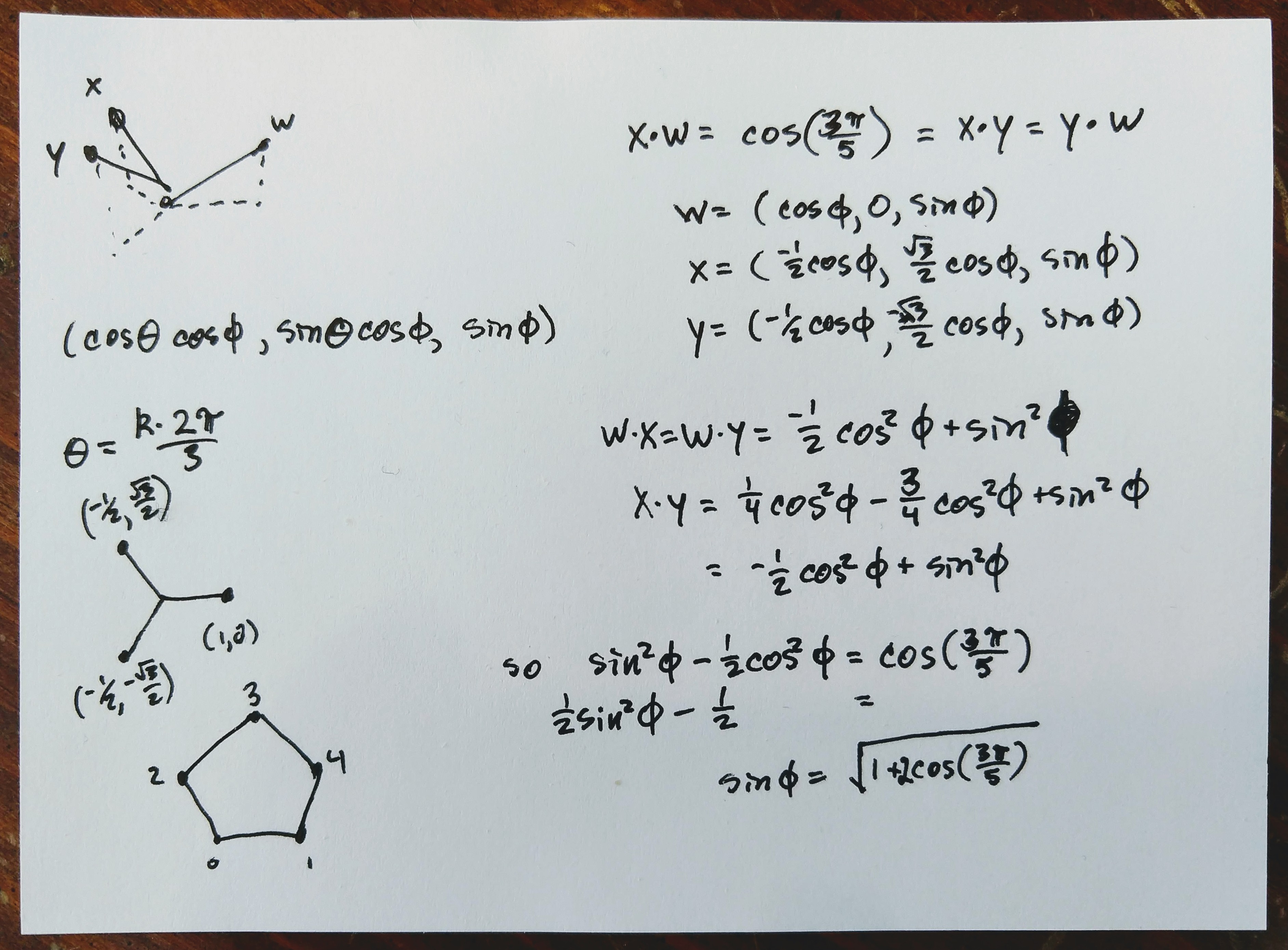 There's nothing like being wrong on the internet to motivate a person. Now I've completed the homework exercise! Lengthening two sides of each pentagon by a factor of 1.1140106 results in quadrilaterals which are "flat" measured to 7 significant digits. I call these "isoscales" pentagons, because they still have a reflection symmetry. The three other sides are rhombuses, and the polyhedron still has 3-fold rotational symmetry. Here's a picture! (There are some extra lines because I didn't bother to remove duplicate vertices or encode which ones should be connected. Click through the homework link above for an interactive version.) 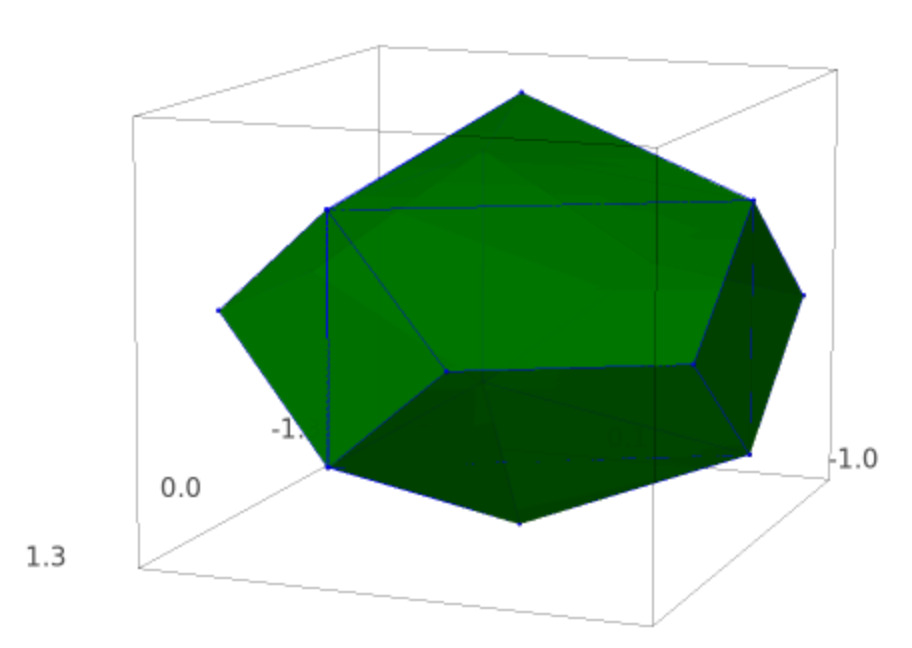 This is a virtual polyhedron model for K5 with three isoscales pentagons and four rhombuses.

To encode this in the folding library, you'll have to learn a little more about it than I already know. Here are the vertices of the pentagons and quadrilaterals for you though!