This past Christmas I became interested in making some 3D stars. There are lots of ways to do this, but the most interesting ones are called Near-miss Stellations. Here are a couple of pictures; I'll explain why I like them below. 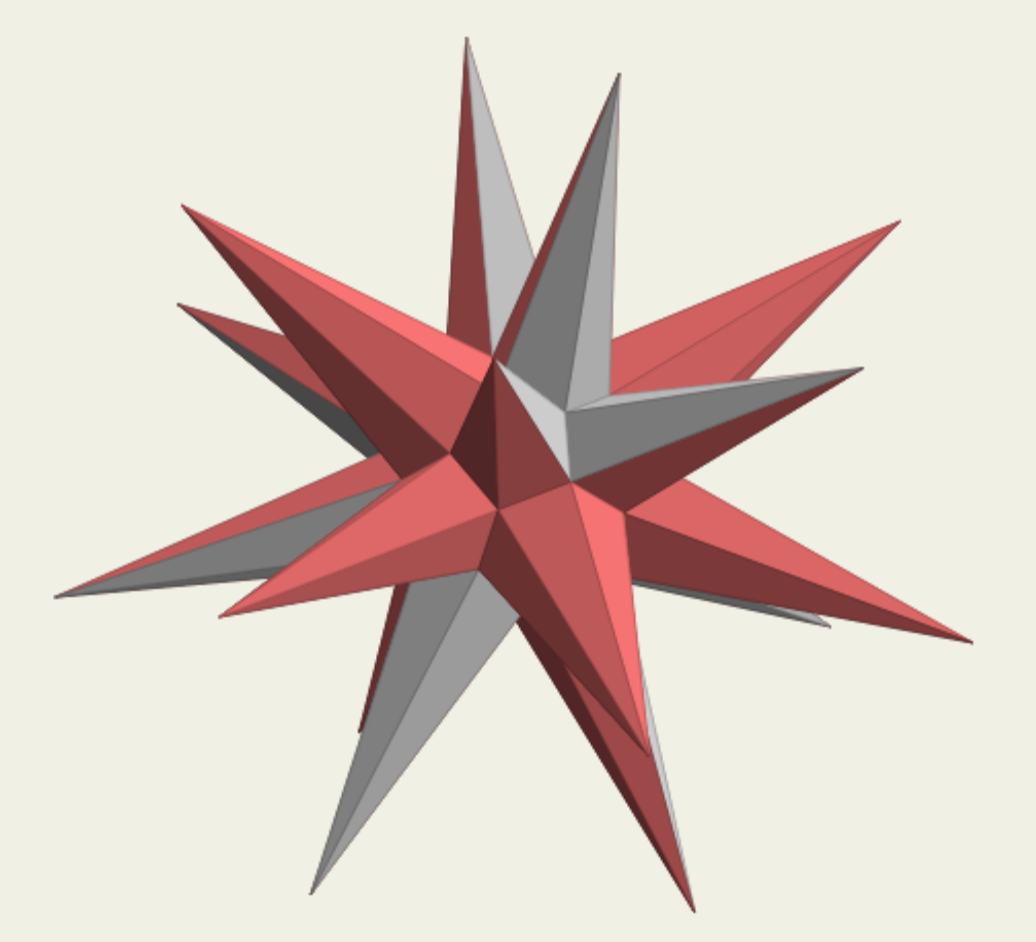 The Moravian Star and Archimedian Stellations

It all begins with the Moravian Star. This is a traditional Christmas ornament and, while I think it's neat, it's also a little boring.

According to Wikipedia, there are several varieties of this star, but they're all based on Archimedian solids—polyhedra that are made from regular polygons (that is, polygons with equal-length sides and equal angles between them). Whenever you have an Archimedian solid, you can put a pyramid on each face, and that makes a star. The action of putting a pyramid on each face of a polyhedron is called stellation, which literally means "making a star".

The Archimedian solids have another subtle technical property, which I'll come back to below. 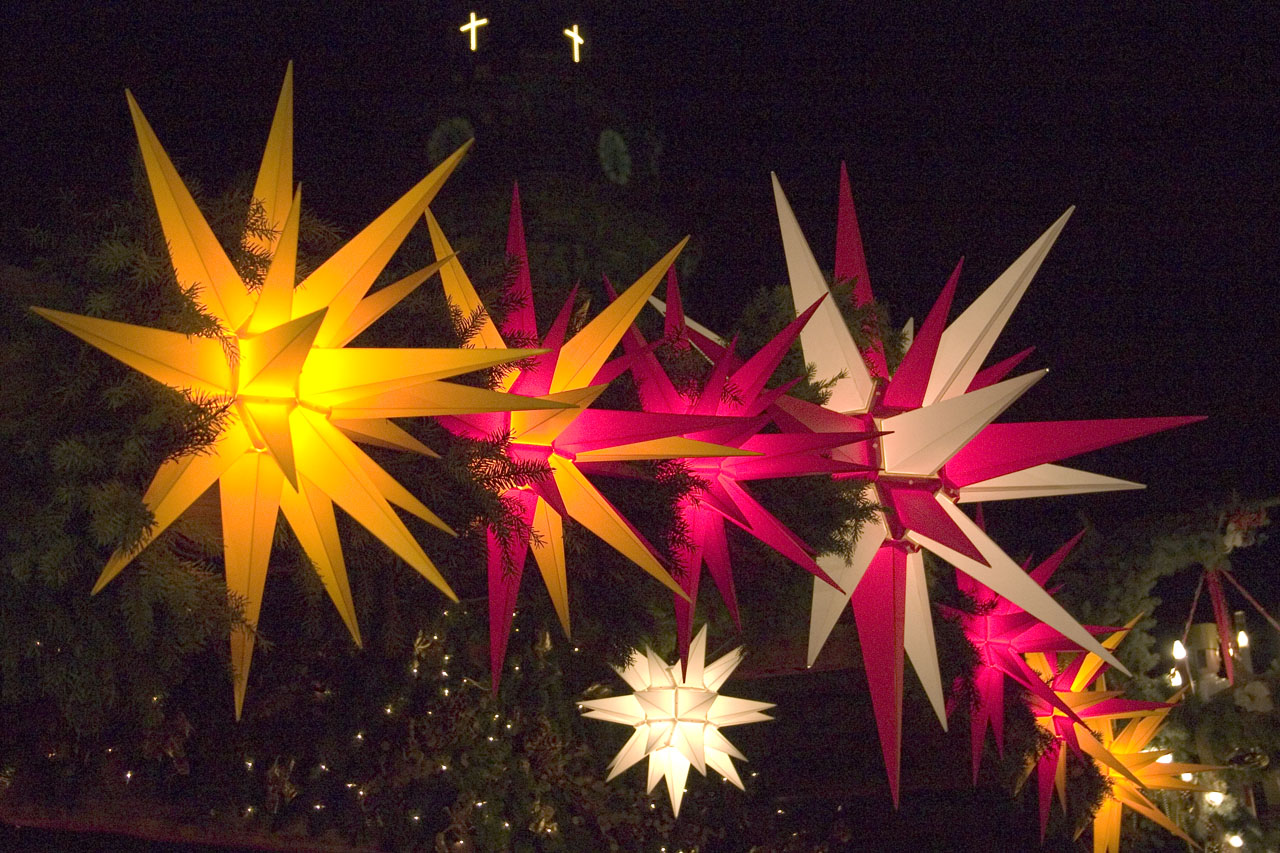 Of course, you can stellate any polyhedron. The Platonic solids are a famous sub-type of Archimedian solids, with the additional property that all faces be the same regular polygon. For example, this Mexican star is based on the dodecahedron -- the Platonic solid made from regular pentagons. With Archimedian solids, you can have different-sided faces, as long as they're all regular.

The Platonic solids are so special there are only 5 of them. Because they are so regularly-shaped, they make good dice, and are often used in games that need more interesting dice than the standard cube. The Archimedian solids include the Platonic solids, but there are 13 total—the 5 Platonics, plus 8 others. You can stellate any one of these, and you'll get something neat. 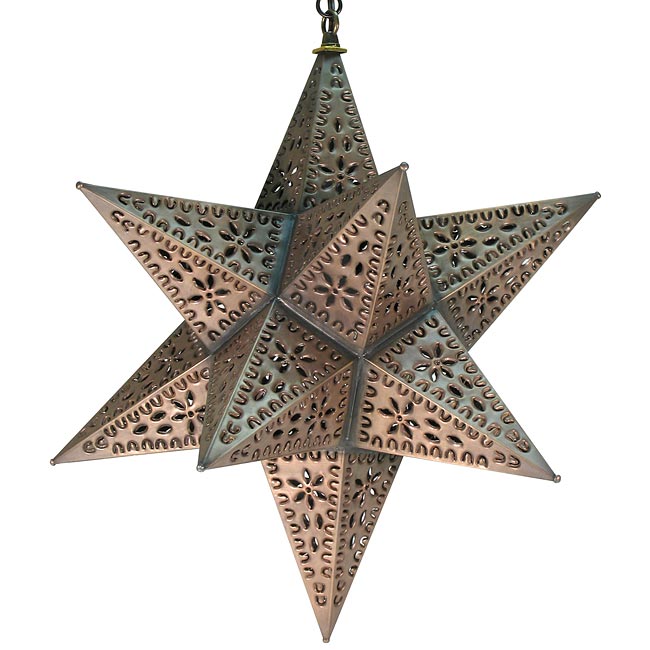 This Mexican star is a stellated dodecahedron.

Some of the Archimedian solids, from Wikipedia.

The Johnson solids (no relation)

All of the Archimedian solids are cool, but sort of boring because they've been known for a long time. Since Plato and Archimedes, in fact (roughly 400 B.C.E. and 200 B.C.E.). But there is another class of polyhedra that are less familiar. 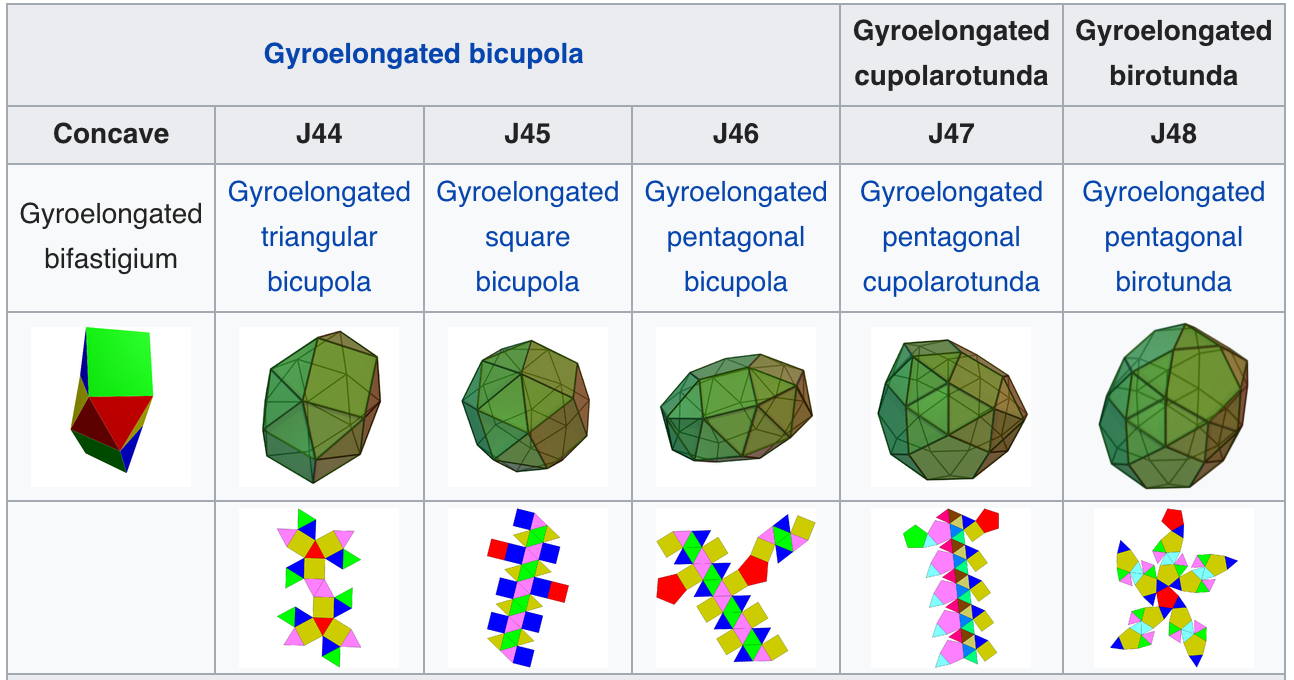 Some Johnson solids from Wikipedia.

They were catalogued by Norman Johnson in 1966, and before that no one knew about all of them. He found 92 possible ones, and later it was proved that these are the only polyhedra that can be made with regular faces (not counting cylinders and pyramids, of which there are infinitely many, but no surprising ones). It's amazing to me that these were understood so recently in the history of polyhedra.

But the Johnson solids aren't quite interesting enough for me either. There's an even more obscure collection of polyhedra, which Johnson discovered while working on his list of 92. They are called near-miss Johnson solids because, while it seems like they have regular faces, they're actually a little off. I've never heard of anyone making stars based on these, and I like that they're just a little away from regular, but can't be made regular.

The simplest of these, which has a weird name in the picture above, is also known as the associahedron, and it comes up in my research work. I was working on some pictures of associahedra, and eventually found out about the connection to near-miss Johnson solids that way. 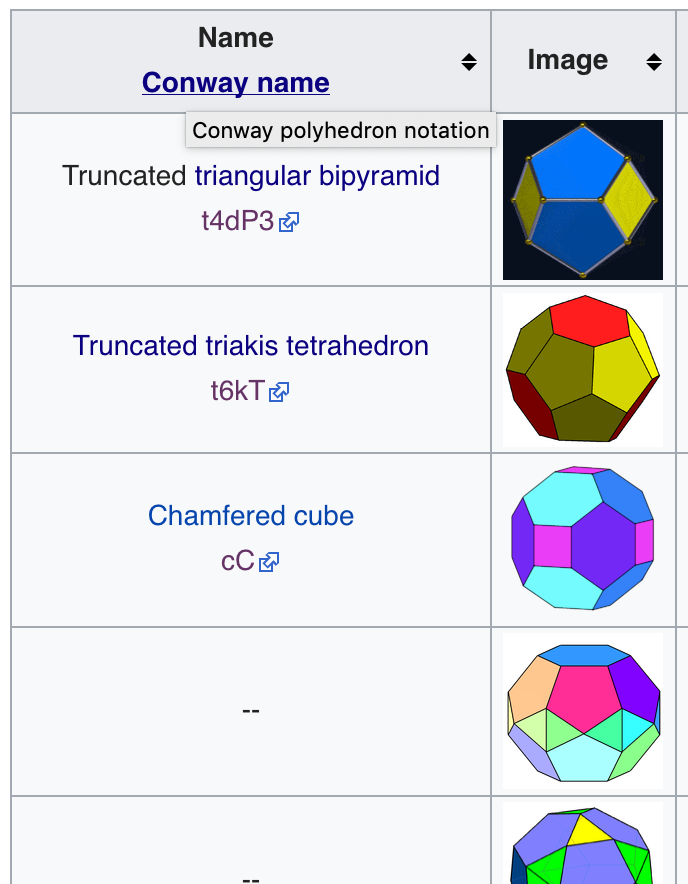 Some of the near-miss Johnson solids, from Wikipedia.

I'd love to have some stars made from near-miss solids; I love their close-but-not-quite-regular aesthetic. They make nice-looking shapes, and have a really enjoyable level of obscurity. And when you look at a stellated Johnson solid, you are seeing what is basically breaking news in the long long history of polyhedral geometry. They were classified over two millenia after Plato and Archimedes.

If you decide to make some of these, there are actually two ways to make a physical object out of a near-miss solid. What most people do in 3D rendering (that is, most of the people who do 3D rendering of near-miss solids, including people on Wikipedia and the polyHédronisme site linked at the top) is to make a polyhedron—flat edges and faces—but with slightly non-regular faces.

But if you actually make one out of paper, you can start with regular faces and tape them together. When you do, the faces aren't quite flat; they're a little curved, so you don't actually have a polyhedron. Here's a picture of one I made back before I knew most of this context. You might think the subtle warping of the sides is because of the imperfections in the paper model, but really that's a feature, not a bug! 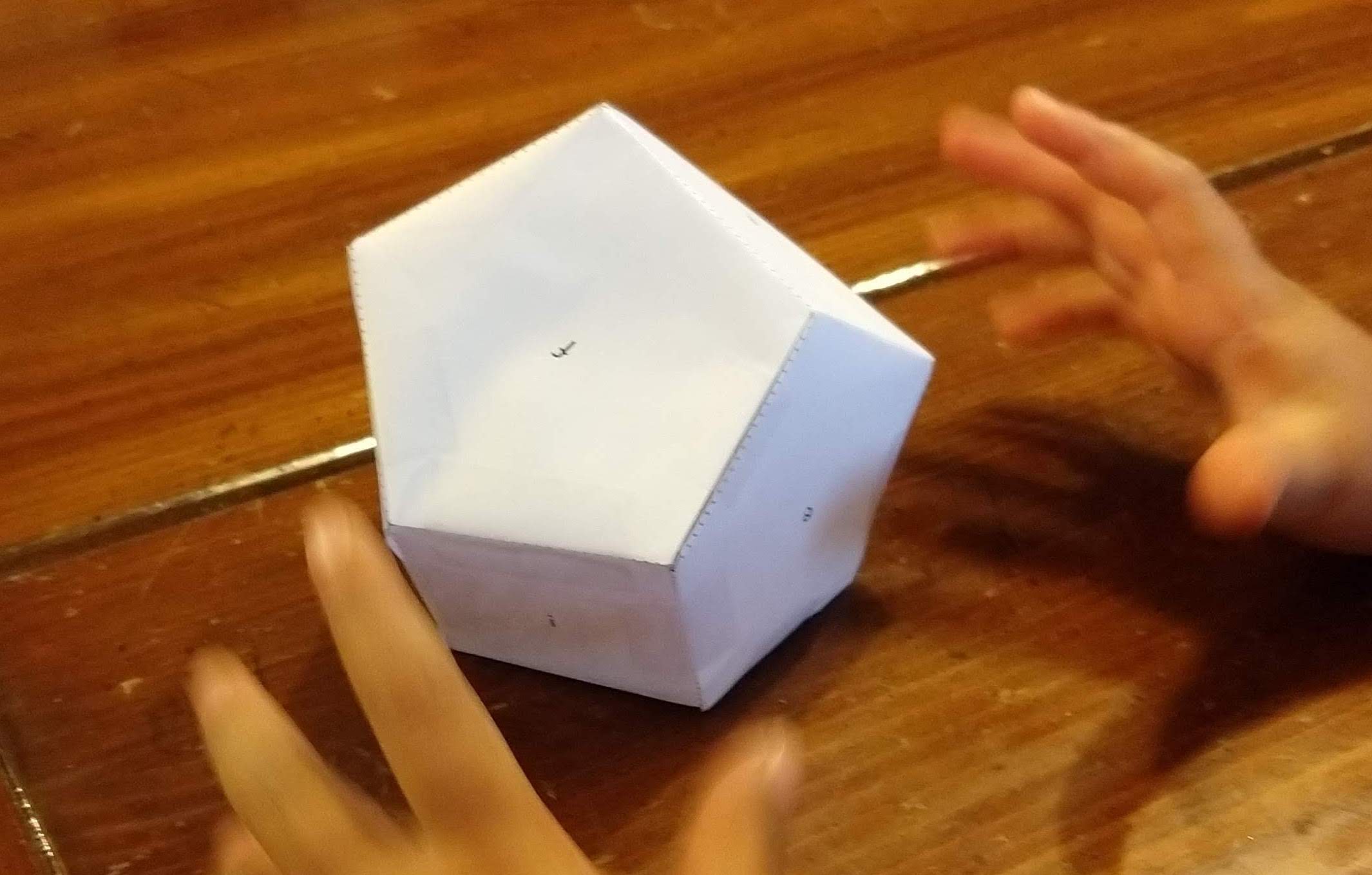 An associahedron I made from paper.